(Summary description)"At this stage of China's economic development, the growth of traditional kinetic energy has been limited, but new economy and new kinetic energy are booming. This is both a challenge and an opportunity for us!" said the Prime Minister. 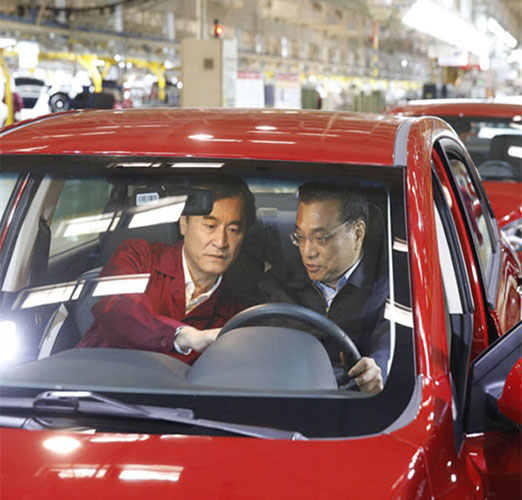 (Summary description)"At this stage of China's economic development, the growth of traditional kinetic energy has been limited, but new economy and new kinetic energy are booming. This is both a challenge and an opportunity for us!" said the Prime Minister.

The original text was published on China Government Network, 2016-02-24. (Data map) Li Keqiang went to Anhui Jianghuai Group Holdings Co., Ltd. to inspect the R&D and production of new energy vehicles. He got into a new energy car and went to the front and rear of the car to inquire in detail about the various parts of the car.

"At this stage of China's economic development, the growth of traditional kinetic energy has been limited, but new economy and new kinetic energy are booming. This is both a challenge and an opportunity for us!" said the Prime Minister.

The first topic of the meeting that day was to determine measures to further support the new energy vehicle industry and promote green development through structural optimization. Li Keqiang emphasized that "new energy vehicles" are a symbolic industry of the "new economy" in the industrial field.

The person in charge of the relevant department introduced a set of data in the report: Since 2013, with the intensive introduction of various national support policies, my country's new energy vehicle production has jumped from 17,000 to the current 379,000, with an average annual increase of nearly 400 %.

"This shows that society and the market have a huge demand for the new energy vehicle industry. All departments should follow the trend, actively promote the 'new economy' and cultivate new momentum for China's economic development!" Li Keqiang said.

He also used the "S-shaped curve" of technological progress to further illustrate the transformation of the old and new kinetic energy of the Chinese economy.

"China's economy has developed to this day, and it is facing a painful period of transformation. It is not in line with economic laws to continue the high growth of traditional kinetic energy as in the past." The Prime Minister said, "But as long as we move forward with tenacity, let the 'new economy' take shape. The new 'S-shaped curve' will drive new momentum in China's economy."

Li Keqiang said that the initial form of my country's "new economy" has now taken shape, and the support for employment has exceeded expectations.

"The development of new energy vehicles is a major trend in the world. At present, China is in a rare opportunity period and is on the same starting line as many countries." Li Keqiang said.

A set of data can support the Prime Minister's judgment: in 2015, 4 Chinese companies entered the top ten global sales of new energy passenger vehicles; and among the top three sales companies, two were from China.

In this regard, Li Keqiang emphasized that the government should further strengthen the policy guidance for the development of the new energy vehicle industry. On the one hand, control measures such as restrictions on travel and purchases should be relaxed, and on the other hand, support for government procurement should be increased.

"The new energy vehicle industry chain is very long. Accelerating the development of this industry will play a great role in seizing the commanding heights in the future, stimulating industrial development, and driving employment. It can be said to serve multiple purposes with one stone." The Prime Minister said, "We must supervise the implementation of restrictions on new energy vehicles. Purchasing restrictions, crack down on 'fraudulent subsidy' behavior. Establish a reasonable investment return mechanism, and encourage social capital to enter service fields such as charging facility construction and operation, vehicle leasing, battery recycling, etc. Further increase the proportion of new energy vehicles in government procurement The industry is driven.”

In the field of Internet of Things construction, new energy vehicles must seize the key technologies and take the lead

"When I went to CRRC Group to inspect before, I saw that they have upgraded traditional lithium batteries to composite materials, which may soon be put into application in high-speed rail. Relevant departments should strengthen active coordination, so that these common technologies can be used for new energy vehicles as soon as possible. open," the Prime Minister said.

Li Keqiang made it clear that the new energy vehicle industry should not be "raised in a rush", but must actively integrate advantageous resources through market means. Local governments should also break down protectionist barriers and accelerate the promotion of the use of new energy vehicles.

"We must make full use of the characteristics of new energy vehicles to promote the intelligentization of vehicles and the digital transformation of road networks." The premier said, "In the field of Internet of Things construction, new energy vehicles must seize the key technologies and take the lead." (Li Zhinan)