(Summary description)For new energy vehicles, the battery is undoubtedly one of the heaviest parts of the vehicle, so the lightweight technology of vehicle power batteries is one of the important technical development directions. As Keyi Power, which has been deeply involved in this industry for more than ten years, it can be divided into three stages on the "advanced road" of lightweight. 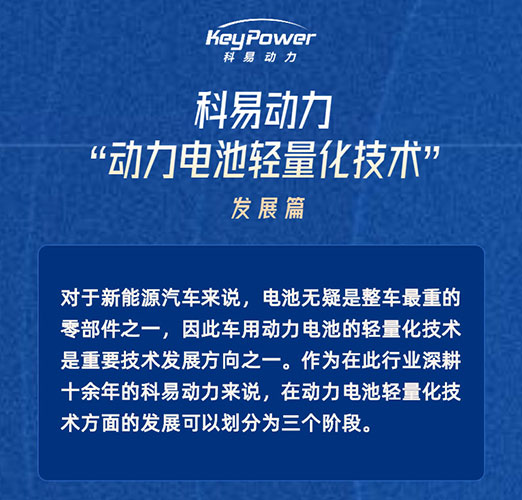 (Summary description)For new energy vehicles, the battery is undoubtedly one of the heaviest parts of the vehicle, so the lightweight technology of vehicle power batteries is one of the important technical development directions. As Keyi Power, which has been deeply involved in this industry for more than ten years, it can be divided into three stages on the "advanced road" of lightweight.

This stage mainly refers to the period before 2016, when the new energy vehicle industry was like Pangu opening up the world, and the entire industry was in a state of ignorance. Although Keyi Power had a good technical accumulation in power batteries at that time, Keyi Power, which had not yet experienced industrialization, was still like an ignorant child, growing wildly with the development of the entire industry. The products developed in that period were mainly used in commercial vehicles, and the pursuit of light weight was not high.

The second stage: the pursuit of perfection

On December 30, 2016, the new subsidy policy for new energy vehicles was officially implemented, and the country proposed the energy density index of battery packs for the first time. The country in this period is like a parent, guiding a development direction for the savagely growing power battery industry. Since then, the power battery industry, which has goals, is like a teenager who has just passed adolescence, focusing on racing against time on the lightweight track.

In this period, Keyi Power also has to adapt to the needs of the times, make full efforts in lightweight technology, give full play to its technical advantages in the fields of structure, material, thermal management, process and manufacturing equipment, etc. It's a moment of brilliance.

The third stage: return to rationality

When any technology develops to the extreme, it will become a double-edged sword. While the infinite pursuit of energy density will be accompanied by an increase in cost and a decrease in safety. The high prices of new energy vehicles, as well as the occasional news reports about new energy fires, have become "stumbling blocks" restricting the development of new energy vehicles.

In the second half of 2018, Keyi Power made a return to rational judgment on the basis of fully researching the development of the new energy automobile industry. The power battery pack should explore a relatively balanced sustainable development between safety, cost and light weight. technical route. It seems today that the strong return of lithium iron phosphate batteries also justifies the judgment of Keyi Power.

In 2020, Keyi Power launched a hot-selling A00-class pure electric vehicle PK801 power battery system. Under the pressure of cost, through the traditional sheet metal stamping outer box, the energy density of the small electric vehicle lithium iron phosphate power battery is more than 140Wh/ Breakthrough in kg. The product has accumulated sales of tens of thousands of vehicles, and is still in production and sales.

Keyi Power has been deeply involved in the power battery industry for more than ten years, and has grown up with the entire industry. It has gone through several baptisms from the initial ignorance to the maturity of Nu Skin. Today's Keyi Power has sufficient technical accumulation and a perfect R&D system, but we still do not forget our original intention, still carry the courage and belief when we started our business, and are facing future challenges with a more confident attitude!